Are We Headed for a Depression?

Are We Headed for a Depression?

Throughout the process of this coronavirus roller coaster, a word has emerged that is being said with increasing frequency and volume: depression.

Not recession, not even Great Recession Part 2, but depression.

You can see why people would think it’s a possibility: record unemployment rates, unprecedented drops in oil prices, stock market crashes, airlines downsizing, dashed growth projections and businesses closing… no wonder a word like depression does not seem so far-fetched.

Add to that fear-stoking headlines in which various experts predict a cataclysmic downturn.

It’s easy to let the news get you down, and we clearly face multiple serious issues. Yet it’s also important to keep in mind that headlines are written to elicit clicks. And that news is presented with a dramatic tenor to scale up the emotion and fear.

So what happens when we dig a little deeper into this possibility? Are we really plunging headlong into an economic depression?

Jason Furman, an economist and professor at Harvard Kennedy School, tells CNBC that we are not in a depression yet, but, “The United States economy is in a medically induced coma… So the question is: Can we revive the patient when we want to and need to?”

While we have not yet reached the technical definition of a recession — two consecutive quarters of significant GDP decline — the numbers are alarming and not pleasant to consider.

For example, retail sales, considered a bellwether for consumer sentiment and general economic health, plummeted a stunning 16.4% in March, slightly more than doubling the record drop set during the Great Recession.

So while many consider a recession a foregone conclusion despite the fact that the definition has not yet been fully realized, what would make our situation truly cross over into depression territory?

It turns out that there is not a clear and agreed-upon definition for an economic depression. And while the current unemployment rate is quickly gaining on the 25% experienced in the Great Depression, our situation is different. Enough so to cause some to question whether the comparison is valid.

Our economy is in a medically induced coma, but prospects for recovery aren’t all bad. 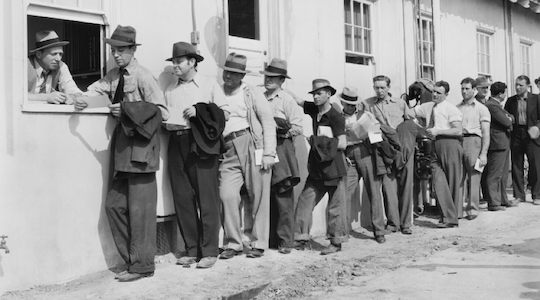 History Points to a Hopeful Future

White House Office of Trade and Manufacturing Policy Director Peter Navarro is a man with a decided opinion about the question of whether we are about to embark on another depression. He asserts that anyone who compares our current situation to the Great Depression understands neither history nor economics.

Navarro goes so far as to characterize comparisons between the current situation and the Great Depression “a pity party.” He cites WWI, poor monetary policy and inflationary cycles of that era as the causative factors of that extended economic downturn.

Navarro further explains that going into the pandemic, our economy was in strong shape, and the current downturns are a reaction to temporary circumstances. In his view, the continued focus on the president’s previously stated mission of bringing manufacturing and supply chains home will be key to pulling us out of this slump.

Writers at the Harvard Business Review are comfortable characterizing our situation as a “macroeconomic meltdown” and point to the depth and speed in the fall of economic output, “but it’s a long way from a macroeconomic shock — even a severe one — to a structural regime break, such as a depression or a debt crisis.”

Echoing Navarro’s observations, HBR points to price stability as a factor to watch and advises us to keep an eye out for extreme inflationary or deflationary cycles. These measures would serve as indication of the breakdown of the economy.

When considering why depression fears are taking hold, the HBR writers point out that “part of the answer is the extreme intensity of the coronavirus shock. The depth and speed of output contraction threatens to influence perceptions and risk assessment in other dimensions of this shock…”

They caution against pulling data points from the Great Depression out of context and using them as any sort of measuring stick for the current situation. “Step back when fear is dominating the thought process and when extrapolating from high-intensity events. Even the worst ever in one dimension doesn’t mean the worst along all dimensions.”

Dale Smith of CNET furthers this point with helpful perspective: “What makes this downturn different… is that it’s caused by our response to the coronavirus pandemic and not the result of a natural economic shift or cycle. Lockdown orders, the closure of nonessential businesses and the rapidly rising unemployment rate have led to reduced consumer spending.”

There are prospects on the horizon that will level off the pandemic and serve as stabilizing forces that will point the economy to recovery, Smith continues. He points to a potential vaccine and an effective therapeutic treatment as two such possibilities and further advises consumers to not be afraid of making needed purchases, choosing small or local businesses when possible.

Bottom Line: We seem to be getting a bit ahead of ourselves, seeing as we have not yet even met the definition of an economic recession. Undeniably, this is a very hard time for a lot of people, and small businesses have been impacted disproportionately.

But it is far too soon to leap at the idea of this being a depression, and declarations to the contrary are likely fearmongering and clickbait.