Is America’s Love Affair Over?

Is America’s Love Affair Over?

Mark and Nicole are Middle America suburbanites who avoided going into the city whenever possible. The constant traffic, ever-present construction and the struggle to find parking… it’s just more trouble than it’s worth.

But a company event required them to get downtown, so they decided to take the light rail instead. The parking was free, and their trip into town was a breeze as the train sped over clogged freeways. Not to mention the traffic that stopped for them as they flew across congested surface streets.

Nicole was sold on the idea and started taking the light rail to her job on the near south side.

“I’m surrounded on the rail by business commuters, students and people who don’t want to mess with parking at the airport. I can work on something on my laptop on the way in and the fares are less than I was paying for gas. I feel kind of stupid that I wasn’t using this years ago instead of my dreaded, stressful driving commute” she explains.

With light rail and other mass transit options growing in cities across the nation, Nicole’s experience reflects that of commuters nationwide. So much so that the Federal Transit Administration created the Capital Investment Grants program to funnel funding worth tens of millions of dollars at a time into cities looking to implement or expand mass transit.

But mass transit is just one of the many reasons that driving, often measured in miles per year per capita, is down. Americans have long been said to have a love affair with their cars and driving, but that may be changing. While once a mainstay of the largest cities and the coasts, alternate methods of transportation are gaining popularity throughout the nation.

There are several forces impelling these changes.

Take for example baby boomers, the generation born between 1946 and 1964, who are retiring at the astounding rate of 10,000 per day.[2] Those numbers add up fast, and retirees are subtracting dramatically from the number of commuters on the road.

Another factor contributing to the ever-declining rate of driving is the number of Americans working online from home. This trend has grown precipitously with every technological advance and doesn’t look to be turning around anytime soon.

As reported in 2017, 3.7 million employees (making up 2.8% of the entire U.S. workforce) work from home for at least half the time. The number of regular telecommuting employees (excluding the self-employed population) has grown by 115% since 2005.[3]

Not only are we working online more, but we are shopping online and entertaining ourselves online as well. Why go to a movie and dinner when every movie and show ever filmed is now available on streaming platforms, and a few taps on an app will bring DoorDash to your front porch with whatever you’re craving?

Young adults are also having their own impact on driving habits, with their eco-conscious preferences for alternative transit and their willingness to live in cities closer to their places of work. They’re also waiting longer to get their driver’s licenses in the first place than past generations did.

Transportation and the Economy

Historically, growth in miles driven per person per year has been tied to economic growth, with miles tapering off during downturns. But while real gross domestic product per capita has continued to shoot steeply upward in recent years, vehicle miles per capita has trickled to a near flat rate.[4]

Yet another factor is playing a role: Prices for cars and trucks are rising, and Americans are going into more and more debt to obtain them.

The Wall Street Journal reports that

Incomes have risen at a sluggish pace in the past decade, but car prices have grown rapidly. New technological and safety features, such as larger and more sophisticated multimedia displays, have made even the most basic cars more expensive. U.S. consumers have also veered toward pricier rides such as sport-utility vehicles that tend to dominate auto showrooms. The result is that consumers are seeking bigger loans than ever to purchase a car.[5] 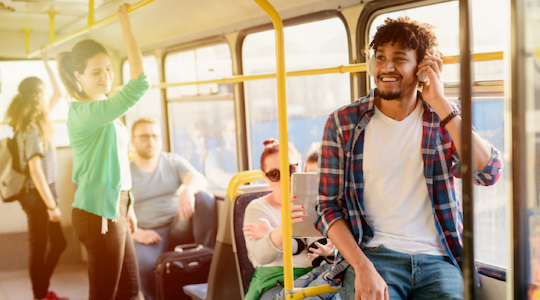 Car loans are now commonly stretching out to seven years, a practice that was once the exception. Jeff Sparshott of The Wall Street Journal reports that borrowers and dealership employees are now more likely to exaggerate buyer income to expedite approval, while large lenders have removed safeguards that flag suspicious applications.[6]

Sparshott goes on to write that consumers “held a record $1.3 trillion of debt tied to their cars at the end of September, up from about $740 billion a decade earlier.”[7]

Despite these trends, crowded cities, urban sprawl and fast-growing suburbs make our roads feel more crowded than ever. In fact, most people in the U.S. are still driving cars, with 83% driving several times per week.[8] At this rate, freeway and surface street congestion will not decrease any time soon.

The future of driving remains to be seen, with young Americans spearheading the trends and seeking out options that involve less driving. Most Americans also believe that driverless cars will become commonplace over the next decade, but the affordability of this option for the average American remains to be seen.

With ever-increasing car prices and the growth of services like Lyft and Uber, combined with more viable mass transit options, there may actually be fewer cars on the road by the end of the coming decade.