On the surface, a docuseries about wealth might not seem to have a lot in common with a science fiction television show. But in the filming of Money Revealed, more than one of our experts expressed an affinity for Star Trek.

And while it might seem like an unlikely pairing, when you break it down there are some really good reasons why the show is so popular among entrepreneurs.

The passion that the moments spent watching this favorite show lit within them, for example. Without that passion, they wouldn’t have been able to become the financial gurus and successful entrepreneurs they are today.

Ray Blanco, whose expert advice can be found in Episode 2 of Money Revealed, jumped right into his interview by professing a lifelong love of Star Trek.

Ray shares that immersing himself in the world of Star Trek gave him a glimpse of what things might look like in the future. It made him start thinking about the state of the world’s technology.

Remember classic films from the ’80s and ’90s that envisioned a technologically advanced future of flying cars and automated robots set in the 2010s and 2020s? Well, we’re here now… and it looks like we’re behind…

With that in mind, Ray has dedicated himself to bringing you into the future now with his commentary and coverage of tech in the world.

Ray reminds us of Star Trek’s optimistic version of the year 2364, where technological advances have taken away the scarcity, disease and division that have always plagued humanity.

In the absence of these hurdles, a new type of economy has developed…

One that’s based on abundance and confidence in humanity, rather than on fear and scarcity.

Entrepreneurs tend to see a future where things are brighter, better and more abundant. They look for ways to make life easier, bring security and wealth to others and build a better tomorrow for the generations to come. Futuristic and sci-fi shows often envision a similar universe, one where the world’s ills have been eradicated through the collaborative knowledge of the world’s smartest people.

In Ray’s case, the technology of Star Trek had a particularly attractive pull. As a young man, Ray battled cancer. He credits the fact that he survived the experience to technology. This gave him an even deeper interest in the field of biotechnology. 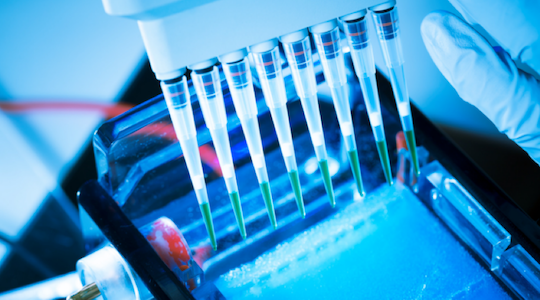 Soon that interest evolved into a career as he began to explore the world of biotech stocks.

Today, Ray is the editor of Seven Figure Publishing — the creator of a series of newsletters showcasing cutting-edge tech and biotech companies, encouraging his readers to invest in stocks that will make a difference.

He focuses on promising biotechnology that truly has the potential to change the world. On a daily basis he sees real-life possibilities unfolding that, not long ago, were as futuristic as the tech once featured in sci-fi shows like Star Trek.

As Ray can attest, today’s innovations are truly bringing us a brave new world. And when people invest in biotech stocks, they are participating in something amazing…

“It’s a two-way street,” Ray says. “Investors enable these new technologies, these world-changing technologies. And at the same time, they can profit from it. So you get to do well by doing good. And it’s a beautiful thing.”

Entrepreneurs and Star Trek captains share the spirit of adventure, the desire to learn and the drive to make the world a better place. They’re both willing to put it all on the line to see their dreams of a better future come true.

So what will it take to give society that little push to transform modern technology into the utopian future we’ve always anticipated?

The passion to solve the world’s technological problems can be found in the strangest places (as our financial gurus-turned-Trekkies have pointed out).

Today, we’ve got the power to be part of something that’s truly life-changing… even through something as simple as which stocks we choose to purchase.

We can set our sights on a brighter future and, as Captain Picard would say…